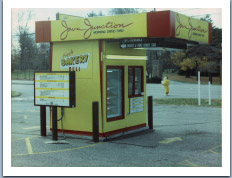 In 1989 (before Starbucks), Mark Haertzen opened Java Junction, a drive-thru coffee stand, in Louisville, Kentucky. It featured a window through which customers could see the donuts and muffins from their vehicle. 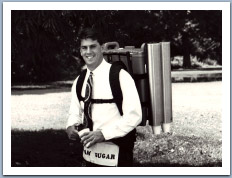 Due to lagging sales, he created a backpack mounted drink dispenser to sell coffee directly to motorists stopped at the traffic light in front of his store. 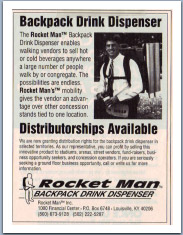 He closed the coffee shop in 1991. A short time later, he quit his bank job and began making Rocket Man™ Backpack Drink Dispensers in his garage. Rocket Man, Inc. was incorporated in 1992 as a manufacturer of portable dispensing equipment. 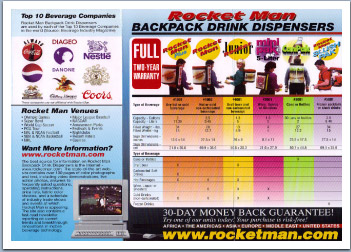 The equipment was modified to dispense all types of beverages, including soft drinks, beer, and frozen margaritas. The company expanded quickly and had export sales in over 55 foreign countries. Customers included Coca-Cola, Nestle, and Anheuser-Busch. 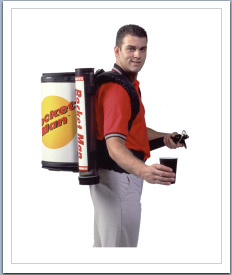 The Company tried to sell the equipment to stadium concession companies for hawkers selling drinks. Rocket Man encountered some resistance so he tried to demonstrate the equipment’s benefits by managing hot chocolate vending operations at high school football games. 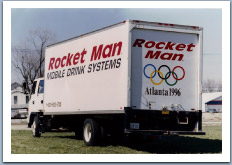 Rocket Man quickly realized the potential for selling beverages at sporting events. The Company created a service division in 1996 and began contracting with local stadiums to manage their walking vendor operations as a sub-contractor. 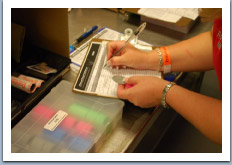 Through trial and error, Rocket Man fine tuned its systems and gradually expanded. 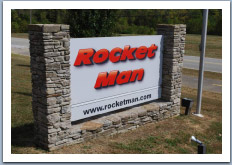 Today, the Company’s workforce of 1,500+ sells food and beverages through walking
vendors in more than 20 major sports and
entertainment venues across the United States.


Rocket Man has been recognized by INC MAGAZINE as one of the fastest growing private companies in the United States.